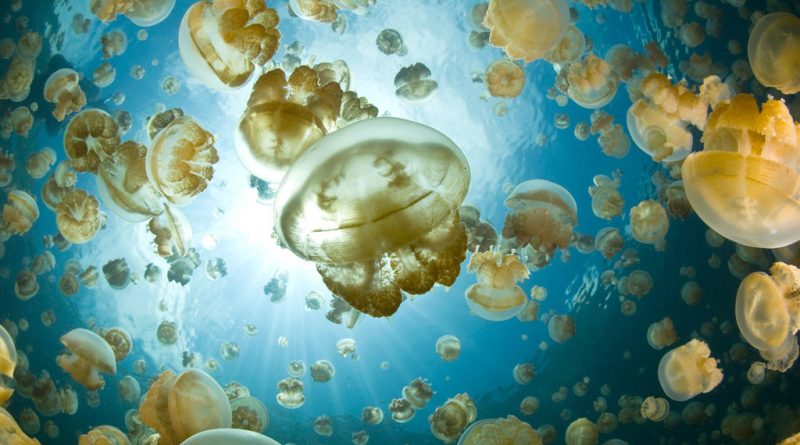 Going swimming with the jellyfish in Palau has been an item on many people’s bucket list that unfortunately had to be put on hiatus in 2017. In 2016 scientist warned, that these famous jellyfish had all but disappeared.

Some experts even warned that the lake’s future ecosystem may be at risk. David Gruber, marine biologist, went as far as saying, “this may be the tip of the iceberg.” Scientist aren’t sure exactly why the jellyfish disappeared, but blamed the drought caused by El Nino— a weather phenomenon in the Pacific Ocean. Things started getting obviously worse when barely any jellyfish could be seen. The residents and government finally took a stand in 2017 and banned any tours from taking place at the lake. This was to let the jellyfish population heal.

Ongeim’l Tketau Jellyfish Lake is finally open to visitors after 2 years of being closed off to the public! According to marine biologists, thousands of golden jellyfish have once again re-populated the lake and a survey taken by the CRFF (Coral Reef Research Foundation) in December 2018 states that the population is back up to 630,000. The numbers are nowhere near what they used to be during the lakes prime years (there were close to 30 million jellyfish in 2005) but biologist are very optimistic to the growing population.

Gerda Ucharm, a research biologist with the CRRF said in an interview with CNN Travel, “based on the number from December 2018, the population has not fully recovered yet; however, with this good windy and rainy weather, we should expect to see changes in the population and decrease in the water temperature. If the weather conditions continue to be normal, then we are optimistic that the number should keep going up.”

Palau is home to over 50 different marine lakes, however Jellyfish Lake is the only one open to the public. The other lakes are closed to ensure conservation—only scientists are allowed in for research purposes.

Jellyfish Lake is found on an island of Mecherchar, which is also known as Eil Malk. The lake originally became famous for the jellyfish that don’t give off a painful sting, so you can swim with them and not be in danger. They’re a rare subspecies known as Mastigias Papua Etpison and can only be found in this specific marine lake.

Because of this, the lake has become popular to swimmers looking for their “once in a lifetime” chance to swim with the jellyfish. Although one is free to snorkel to their heart’s content, scuba diving is highly prohibited. Almost 15 to 16 meters below the shore the lake hosts a poisonous Hydrogen Sulfide gas that even the jellyfish don’t go near. A new law will also be initiated as of 2020; a law to ban almost all sunscreens in an effort to save the coral reef and the jellyfish population.  According to a study that was done in 2017, chemicals from sunscreen were widespread in the lake. In fact, this new law is not limited to the lake alone, but is a country-wide ban. Any sunscreen found will be confiscated at airports and any merchant found selling the product will be fined up to $1000. The only sunscreen allowed to be brought or sold will be “reef-friendly.”

While the lake is now officially open, management will continue to monitor the area to ensure its protection.