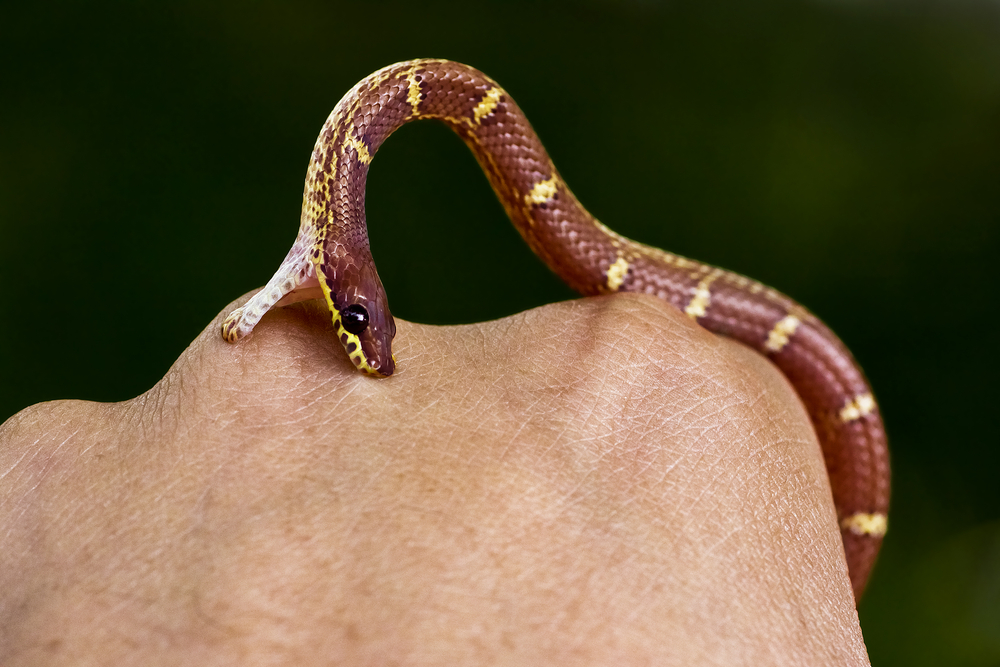 Snakes are regarded as some of the scariest creatures around, and with stories like the ones you’re about to read, that might be with good reason.

Capable of delivering some of the deadliest bites in the animal kingdom, snakes like blue kraits, inland taipans and black mambas are rightly respected for their nerve-affecting venom, which takes effect frighteningly quickly and can swiftly kill humans.

Those unfortunate enough to experience bites from such serpents aren’t always facing a death sentence, though. Anti-venoms exist to combat bites from deadly snakes, so victims stand a good chance of survival when they’re treated quickly enough.

Of course, being bitten is still far from a pleasant experience. These survival stories are shocking enough send a shiver down even the most seasoned herpetologist’s spine.

6. This terrifyingly relatable first-hand account of a rattlesnake bite

Lorraine Jonsson was embarking on her usual post-work hike between Los Angeles and the Santa Monica Mountains when a camouflaged rattlesnake struck out and bit her on the ankle. By the time she’d spotted the venomous viper hidden under a bush, it was too late—the snake had already injected her with its deadly neurotoxins.

‘Within seconds, I started feeling the effects: blurred vision, jelly-like legs, and a horrifying sense of panic’, writes Lorraine, recounting her horrific ordeal to Backpacker Magazine.

It turns out the area she’d been walking through was ideal territory for rattlesnakes, and the warm evening was a peak basking time for the reptiles.

Lorraine says her bite was more severe than most. ‘The snake that bit me injected a standard-issue hemotoxin along with a rare and more powerful neurotoxin that quickly interfered with my brain’s signals to my respiratory system,’ she says. “’I didn’t know it at the time, but I had to get help fast if I was going to survive.’

Although she hadn’t told anyone she was out hiking, Lorraine was lucky enough to encounter some friendly drivers who picked her up and made sure she reached the hospital six miles away. ‘Within an hour of my bite, doctors administered the first of 116 vials of antivenin that would ultimately save my life,’ the victim recalls.

‘If it hadn’t been for my proximity to the hospital and my healthy heart—thanks in part to those regular canyon hikes—I wouldn’t have made it.’

5. This teenager who survived a bite from the world’s most venomous snake

In September 2012, an Australian teenager living near Sydney was bitted by an inland taipan, a species widely considered as the most toxic in the world. These snakes harbour venom that is specifically designed to kill warm-blooded species; it is estimated that a single bite contains enough venom to kill 100 fully grown men.

So how did a teenager survive the attack? Mainly due to the speed of his treatment—the young man’s hasty hospital arrival ultimately saved his life, as taipan venom can cause death in as few as 45 minutes.

The most surprising thing about the incident was that inland taipans aren’t found in the wild anywhere near Sydney. They naturally occur in arid regions over 1,000 kilometres from where the teenager was bitten, so it was speculated that the biter may have been an illegal pet.

4. This brutal bite that caused a woman’s face to swell up and bleed

When Australian woman Janice Taylor felt a prick on her foot during a visit to the local bowling club, she assumed that a spider had bitten her. However, after she collapsed headfirst on to the ground and was rushed to hospital, doctors discovered that this wasn’t the work of some common arachnid—Janice had probably been bitten by a brown snake, considered the second most venomous snake in the world.

Revealing symptoms of the snake’s bite included dramatic swelling of her face, which began to bleed as blood-thinning venom spread through her body from the small puncture wound in her foot (there are some rather graphic pictures of the injuries here, alongside a full report by Perth Now. Janice survived the attack, although it was touch and go: doctors suggested that she should phone her children in case she died. After the awful experience was over, Janice led a campaign to put up posters near the bowling club, warning customers of local businesses to look out for deadly serpents during shopping trips.

3. This snake-obsessed man’s amazing mission to cure bite victims with his own blood

Some people have an affinity for snakes. Bill Haast, however, was obsessed. From capturing wild snakes in the Everglades to bringing exotic cobras home from South America, Africa and India during his travels with the army, Bill was addicted to collecting reptiles from around the world.

In 1947, Bill’s dedication to snakes reached a new level when he opened his own ‘Serpentarium’. Here he willingly extracted the venom of toxic snakes in front of paying customers, being bitten 172 times in the process.

Bill had acquired an immunity to the bites of some of the deadliest snakes in the world by deliberately injecting himself with increasing doses of cobra venom (although his stubborn refusal to accept anti-venom after being bitten by the paralysis-inducing blue krait meant days of painful recovery in hospital).

By donating his blood to snake bite victims, Bill assisted with the survival of 20 different people. However, his good will wasn’t enough to save a boy who was killed by a 12-foot crocodile in his Serpentarium. Despite personally wrestling the dangerous predator, his young visitor was tragically killed.

Wracked with guilt, Bill closed his Serpentarium, but he continued to research snake venom, eventually losing one of his fingers after tissue damage caused by a Malayan pit viper. Despite his radical life style, he reached the age of 100 in December 2010, eventually dying in June 2011.

2. This venom-immune protégé continuing the work of Bill Haast

Another American, Tim Friede, has a remarkably similar story to Bill Haast’s. He’s also been busy making himself immune to snake bites, including those of the notorious black mamba.

Black mamba venom is potent enough to kill humans within 20 minutes, but Tim has managed to build up such a resistance against the snakes that their bites no longer seriously harm him. He hopes that his experiments will help with the development of anti-venoms in the third world.

There are some side-effects: Tim experiences anaphylaxis, an allergic reaction caused by anti-bodies attacking his own body as a reaction to the snake bite. This can sometimes be fatal due to serious swelling and breathing problems. Needless to say, Love Nature strongly advises against this kind of dangerous personal research.

1. And finally, this daredevil dog who was bitten by a rattlesnake but lived to woof the tale

We might worry for our own safety around snakes, but our pets are arguably more at risk. Dogs are intelligent, but rarely are they frightened to go bounding blindly through the tall grass where many dangerous snakes make their homes.

This is what happened to Dusty, a golden retriever living with his owner Dan Owen in Montana. When the dog went following pheasant trails on a small island and failed to return as usual, his owner found him collapsed in a creek with a rattlesnake bite in his paw.

While a friend and fellow dog owner ran for help, Owen stayed with Dusty, talking to him and cooling him down by covering him in a wet shirt from the nearby creek.

‘I was expecting the worst,’ admits the man in an article for The Whole Dog Journal. ‘Dusty was just lying there, and then he began to convulse. His leg began vibrating and shaking, and he got that closed look in his eye.’

‘Something told me not to worry. So I just stayed there with him and talked to him, and after a while he moved a little and opened his eyes. I’d been wondering how in the world I was going to haul my dead dog out of there but I realised there might be hope.’

Soon a rancher arrived to help transport Dusty to an animal centre, where he received anti-venom. One day later, the brave dog was returned home. ‘I had never been so happy to see him,’ says Dan. ‘He was still weak, but after a quiet day at home he started to bounce back.’

‘By the fourth or fifth day, he was himself again.’

The Polar Bears Among Us
Sarcosuchus: The Dinosaur Killer
This Is What Happens When Fungus Fights Back
Tags: snake bite, snakes