American Horseshoe crabs, or Limulus polyphemus, are a species older than the dinosaurs. Reaching up to 60cm in length, with big helmet-like shells and spikey tails, they look like aliens. Did you know their blood is highly valuable to humans? Horseshoe crab blood is worth approximately $60,000 a gallon.

What are Horseshoe Crabs?

American horseshoe crabs live along the North American coastline of the Atlantic Ocean, as well as the East and Gulf Coasts of the United States and Mexico. Although their shells appear similar to other crabs, Horseshoe crabs are actually closely related to arachnids like scorpions and spiders.
There are three other types of horseshoe crabs, but they are all found in South East Asia.
The oldest fossil resembling a horseshoe crab was dated to be 450 million years old. That means horseshoe crabs were alive in the Ordovician period, before dinosaurs roamed the Earth.
They feed on worms, clams, and algae and chews with its legs before pushing food into its mouth. They mate on beaches in May and June, during full moons, new moons and high tides. Delaware Bay is the primary mating spot where thousands of crabs gather every year. A female digs a hole in the ground and can lay as many as 90,000 eggs in one turn. The smaller males follow in hot pursuit to fertilize. Only 10 of these 90,000 eggs will turn into fully-grown crabs. The eggs are a staple in the diet of many fish, reptiles, and birds. 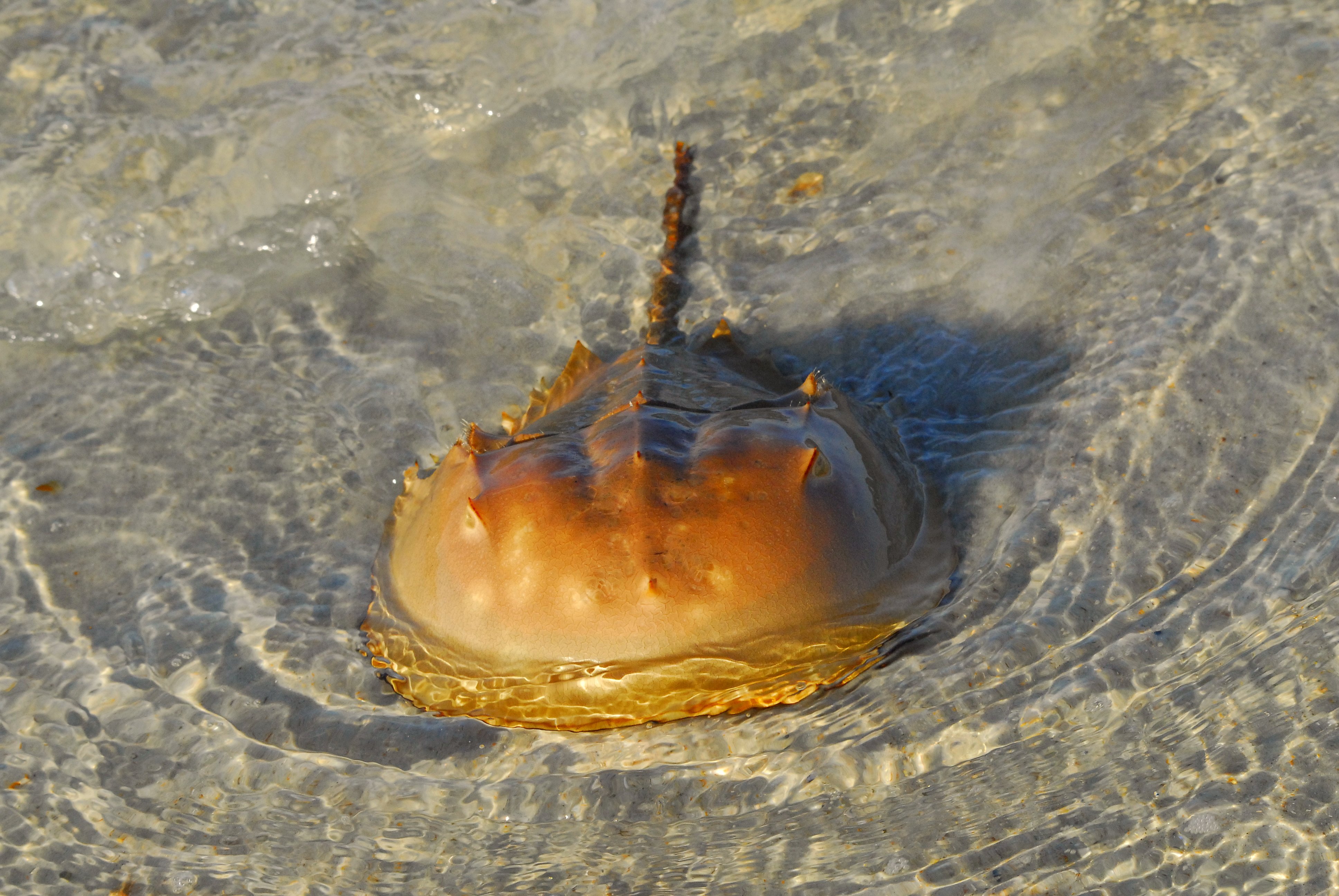 Why is it valuable?

Horseshoe crab blood is blue in colour, due to the presence of copper. But that’s not why it’s valuable. It’s valuable because it contains an “amebocyte” used in the field of biomedics to identify bacterial contamination in vaccines and all injectable drugs.
The “amebocyte”, a mobile cell found in the blood of invertebrates. Similar to a white blood cell in vertebrates, amebocytes defend against pathogens or germs and bacteria. The amebocyte found in the blood of horseshoe crabs is used to make something called “limulus amebocyte lysate” or LAL.
A small amount of LAL is deposited into a vaccine or drug. If it is contaminated, LAL will find the bacteria and surround it in a jelly-like seal. It doesn’t kill the bacteria, but it visibly alerts testers to the infection before it is released for human consumption. It’s incredibly accurate, and only a tiny quantity of LAL is needed.
LAL is the only way to test a vaccine or medical tool for bacteria like E. coli. It was approved for medical use in 1970. Before that, vaccines were tested on animals. Huge numbers of rabbits would be injected with vaccines and monitored for adverse reactions.
So although LAL saved countless rabbits from the process of vaccine testing, countless horseshoe crabs are being used for their blood instead.

What are the effects on the horseshoe crab population?

The medical industry uses 600,000 horseshoe crabs for their blood every year. Standard practice is to remove 30% of the crabs’ blood and then return them to the water, but 30% of these crabs never make it through the process. There is also no efforts made by labs to ensure the survival of the crabs that do make it back into the water.
Horseshoe crabs have a status of “vulnerable” according to The International Union for Conservation of Nature. The population is decreasing and studies are being conducted to determine whether or not this is a direct result of the blood-letting.
A 2001 study done in Cape Cod, Massachusetts observed a group of 20 crabs, 10 bled, 10 untouched for 26 days. The bled crabs appeared weak and disoriented after the process . Female crabs were less likely to successfully spawn after blood loss. 20% of the bled crabs died.

Are There Other Threats?

Habitat loss is the number one reason for population decline. Beachfront development specifically destroys valuable breeding grounds.
The crabs are also harvested for commercial purposes and used as bait to fish other sea creatures. New Jersey banned the harvest and use of horseshoe crabs as bait in 2008 in an effort to save the red knot wading bird, which feeds on their eggs. Other Atlantic States have since followed suit.
Scientists are attempting to develop a synthetic alternative to horseshoe crab blood. But it is currently the only substance approved by the FDA to test for bacterial infections. Scientists from across the globe are calling for Horseshoe Crabs to be labelled endangered by the Wildlife Act in order to preserve the species. It’s in everyone’s best interest to keep the population of horseshoe crabs alive and well.
If you ever encounter an overturned horseshoe crab on the beach, you can save it by gently picking it up by the sides of its shell and flipping it, shell up.

The Polar Bears Among Us
Sarcosuchus: The Dinosaur Killer
This Is What Happens When Fungus Fights Back
Tags: did you know, horseshoe crab blood, horseshoe crabs